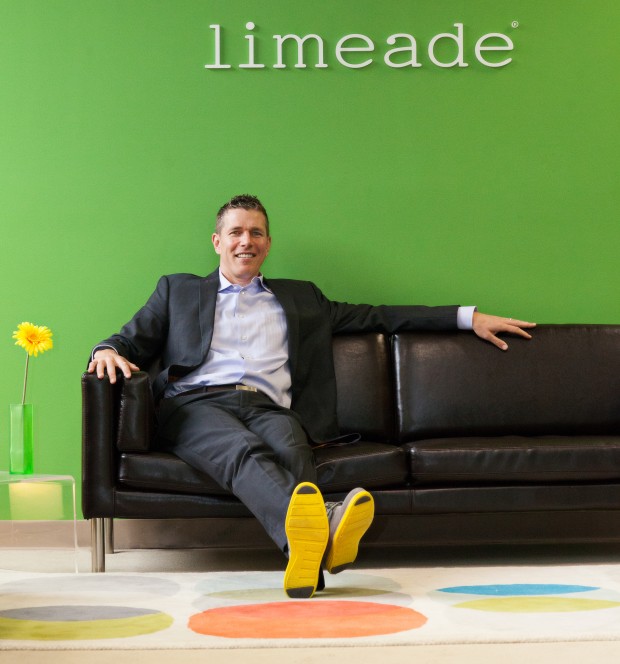 Limeade has raised $25 million from a New York venture capital firm that will help the Bellevue startup fuel its platform that creates incentive-based wellness plans for businesses. Total funding now stands at $34 million, with Oak HC/FT leading the most recent round. All of the cash will be used to fund the business, which now employs 110 people. The company is expected to double its workforce by the end of 2015. “Limeade has done a lot with a little, and we feel like one of the main reasons why we don’t win business is because a lot of people don’t know about us,” said CEO Henry Albrecht, a former Intuit executive who founded Limeade in 2006. “You will see an expansion of our sales and marketing and awareness effort in the market.” But Albrecht also tells GeekWire that the “heart and soul” of Limeade is an innovation company, so the company plans to hire engineers, developers and designers to enhance the platform and roll out new products. More than 100 enterprise customers use Limeade, with the company targeting businesses and organizations with more than 10,000 employees. Customers using the platform include The Ohio State University, Jamba Juice, Washington State Healthcare Authority and others. Limeade operates a Web site and mobile apps that help organizations track incentives and rewards related to co-workers, tracking things such as wellness, safety/training and culture. The idea is to reduce overall healthcare and HR costs by making the workforce happier and healthier. “We focus on the health, well being and performance of the workforce,” said Albrecht. “At the end of the day, a company wants to know if it is working, and they want insights into their workforce and how the program is going. It is really an employee engagement platform for large employers.” Other companies such as Seattle-based EveryMove and San Francisco-based Keas are playing in the arena, but Albrecht declined to comment on competitors saying Limeade obsesses about the happiness of our own customers and users and customer base.” Limeade also faces competitors from legacy health services companies that offer similar functionality. “We have to be aware of the competitive marketplace, but we never get too involved in rubbernecking what the rest of the market is doing,” he said. Albrecht said the corporate wellness market stands at just over $2 billion each year, with the company also playing in the $10 billion human resources market. Limeade makes money by charging employers a few dollars per month for the service, which is designed to cut down on health care costs. GeekWire reporter Taylor Soper contributed to this report. John Cook is GeekWire’s co-founder and editor, a veteran reporter and the longest-serving journalist on the Pacific Northwest tech startup beat. Follow him @johnhcook and email [email protected] Limeade released new employment data demonstrating concentrated focus on increasing gender representation across its global workforce. As of February 2022, Limeade reported 51% women make up the employee population and 48% of director-level and above leadership roles are held by women. Limeade Strengthens Leadership Team with Appointment of Dr. Patti Fletcher as CMO, Andrew Jacobus as VP of Limeade Institute, Sarah Visbeek as VP of Legal and Corporate Secretary and Arif Ansari as Head of Remote As people in the UK slowly head back to the office, businesses need to rethink their employee experience for the hybrid working world. Majority of Job-Changers in the Great Resignation Were Burned Out, Wanted to Be Valued and Cared For

Limeade research finds 40% of employees cite burnout as top reason for departure and more than a quarter (28%) were so dissatisfied with their work situations they resigned without a job lined up.